(A Bar for Everyone)

So you’re in Florence, you’ve seen all the museums and gawked at the Duomo and ate as much pasta as your stomach can handle.  So now, let’s get down the the real important stuff:  drinking.  Florence, the birthplace of the Renaissance, is also a major hub for Italian nightlife.  In part because of the surge of American study abroad students who are notorious partiers more often than not, you can find a group of bar hoppers really on any day of the week.   Being a tourist-infected city, Florence nightlife offers a little something for everyone.  During my semester abroad we mostly went to the American bars but when Caryn would come visit us we broke out of the study abroad bubble — so I got the best of both worlds! 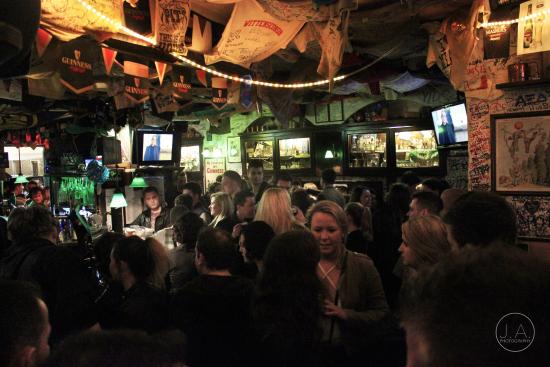 inside of the infamous Lion’s Fountain

Lion’s Fountain is a staple for study abroad students and has been since 1995.  Located at Borgo Degli Albizi 34, it serves cheap beer, food and usually plays grungy early 2000s music.  It’s basically your average college bar you’d find in the States, but if you’re missing home and just want to be around something familiar, it’s the spot to be.  Its sister bar Uncle Jimmy’s (Via dei Pescioni 5) is the same premise but I don’t think they serve food.  But they do host beer pong and flip cup tournaments!  I wouldn’t solely go to these places, I would definitely keep them in your pocket for when you’re craving a good ‘ole American night out.

The last study abroad bar I will talk about here before moving on to the real meat and potatoes is Red Garter at Via dei Benci 33.  We took one of our friends here over the summer and he walked in and said “what the heck?  Are we still in Florence?”  Red Garter is a cross between a bar and a club, having a separate room in the back for dancing and karaoke.  They serve food and karaoke is on every night so you’re bound to have an interesting night.  If you get sick of Red Garter, you can always pop right next door to Kikuya — it’s a little more subdued and has interesting shots.

Colle Bereto is a bar/restaurant near Piazza della Repubblica at Piazza degli Strozzi 5.  We went here all August for group aperitivo (Italian happy hour, basically); they had a good selection of foods (even for a vegetarian like me!) and were able to accommodate our big group.   There’s an upper level that they turn into a nightclub sometime after 10 (don’t quote me on the exact time).  It’s fun and there’s always a lot of dancing and people.  I’d say it’s a good mix of study abroad & not. After a night at Colle, before your inevitable kebab adventure, head to Dolce Zucchero (Via de Pandolfini 38) for a dance in this basement club.  There’s music, dancing, drinks and always really interesting people.

I’m not a big club person but we would go to Club Twenty One pretty often and it was a good time.  They had lots of music, dancing, good drinks and cool lighting.  Check it out at  Via de Cimatori 13.

One of my favorite places to go for a really chill night is Brew Dog at Via Faenza 21.  They have food, beer (obviously) and boardgames in the basement.  Graffiti-style murals paint the walls, making it a perfect background for photos.  Rex Cafe at Via Fiesolana 2 is a really cool bar and lounge.  The drinks are good, there’s a lot of space to spread out in and the ambiance is really relaxed (at least it was when we were there, but I also think we went during the week, so I can’t make any promises for the weekend vibes).  Go to Via Vinegia 21 to check out Blob.  It’s kind of like a more low-key Dolce Zucchero.  There’s dancing downstairs and an upstairs lounge for quiet conversation.

I’ve only been to the Art Bar (Via del Moro 4) once and I can’t wait to go back!  The drinks are beautifully created — it’s almost like you have a fruit salad and a drink!  It was pretty bright inside and was a really cool place to hang out.  I can’t wait to return and snack on more artisan cocktails.

Saving the best two for last, I love La Cite in Oltrarno, Borgo S. Frediano 20.  Part library, part cafe, part bar.  Because it’s across the river, it’s more frequented by Florentines than Americans. La Cite offers nonalcoholic drinks (including great coffee).  It’s a breath of fresh air compared to the bars more frequented by tourists.  The place I probably went the most during my semester abroad is Le Murate Caffe Letterario at Piazza delle Murate.  It’s an old prison turned cafe and housing project.  It has a spacious interior where there’s live music but because it’s located in a lesser-known piazza, there’s tons of room to sit outside as well.  This is where  Caryn and I listened to Jig Rig and heard our namesake, Whiskey Nancies, for the first time.

Where’s your place to spend a night out in Florence?  Where did I miss!?

Nikki is a maker of pictures, scarves and jewelry. She is passionate about plants, learning and the importance of waitressing. She co-authors Whiskey Nancies, a blog about travel and figuring "it" all out, with her BFF Caryn. View all posts by Nikki

She’s Nancy and I’m Whiskey!  No, but really – find out about the origin of that name here.  We’re Caryn and Nikki.  We met in college and bonded over our mutual love of photography, Italy and the environment.  Now we run this blog where we talk about mundane post-college life, crazy travel stories, exciting future adventures and everything in between.  Come laugh & learn with us.

find what ya need